Living in a Building Site: The Over-Development of London's Housing Estates 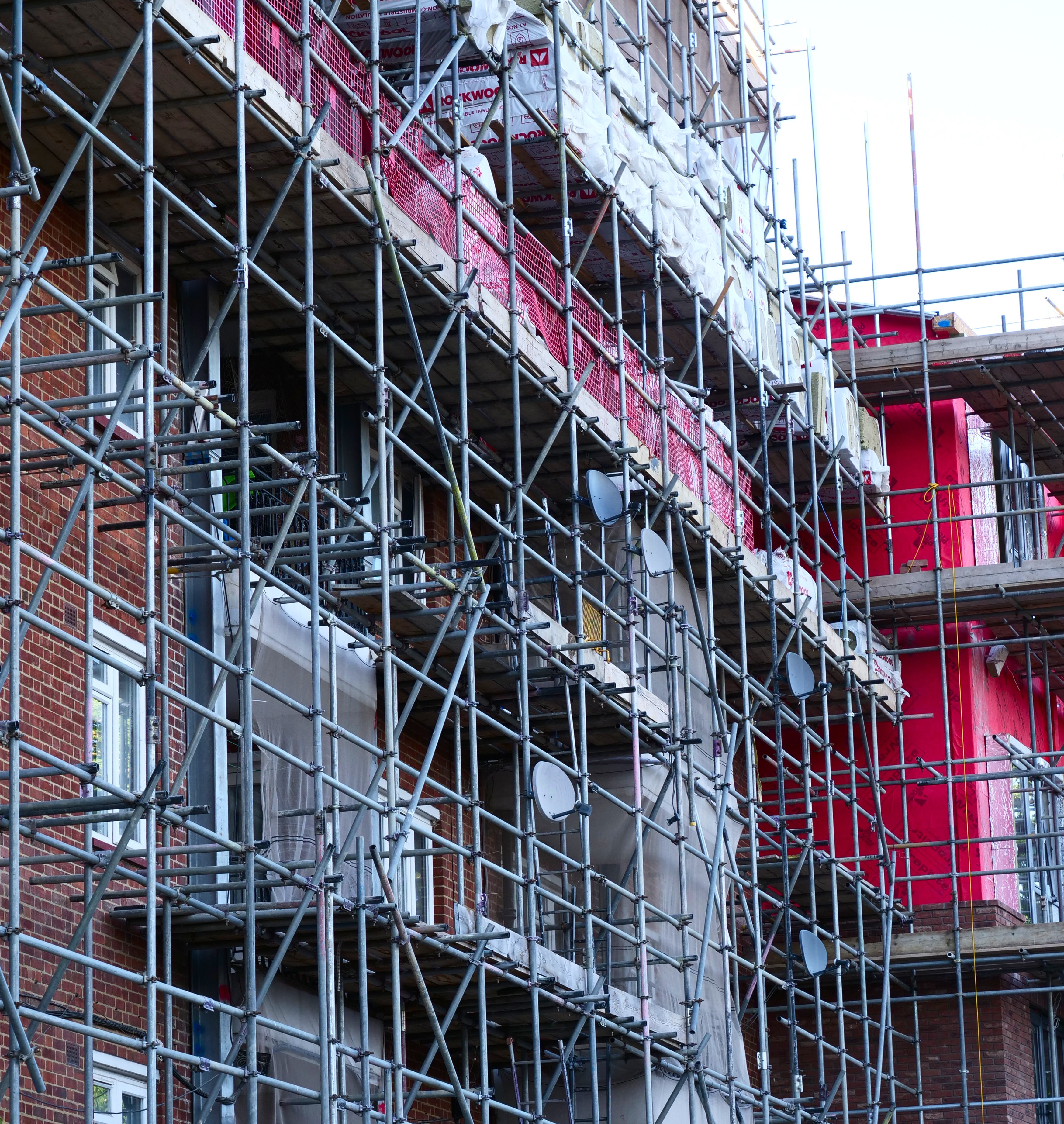 London is in a housing crisis. The cause is a complex mixture of different societal and policy factors, but the practical effects boil down to too much demand and not enough supply. The result is expensive and inadequate housing, if one can get it at all.

The problem is particularly apparent in the social housing sector, where tenants benefit from subsidised rents and enjoy stronger legal protections against eviction1. Owing to central government policy failures2 dating back decades as well as recent local government mismanagement, waiting lists for social housing have become extremely long and the system is unable to properly accommodate even the privileged groups previously supported.

Social housing providers don’t just have to contend with a dwindling supply and rising demand, they also have the compounding problem that much of their existing stock has been left to decay and is now in need of serious renovation. Many post-war developments were shoddily built, and in subsequent years underfunded and incompetent housing departments have let their condition deteriorate further.

In any case, despite their past inactions, local politicians now have no choice but to respond to the spiralling waiting lists and do something. Do something they have:

Antony House and Roderick House are two adjacent small blocks of flats owned and managed by Lambeth and Southwark Housing Association. Built in the 1950s, each block is 4 storeys tall and has 16 flats, for a total of 32 between the two blocks. Located between the main railway line from London Bridge and Southwark Park, the two were in a historically quiet residential area with relatively low density.

Owing to developments over the past several decades, including the Jubilee Line extension creating a new tube station within walking distance at Bermondsey, and the Overground coming to Surrey Quays, the area has come to be seen as a target for new housing construction and regeneration. Indeed, Southwark Council declared the Abbeyfield Estate next to the two blocks a regeneration zone in 2017 and embarked on a plan to redevelop some of the council-owned tower blocks to add more flats and complete internal upgrades.3 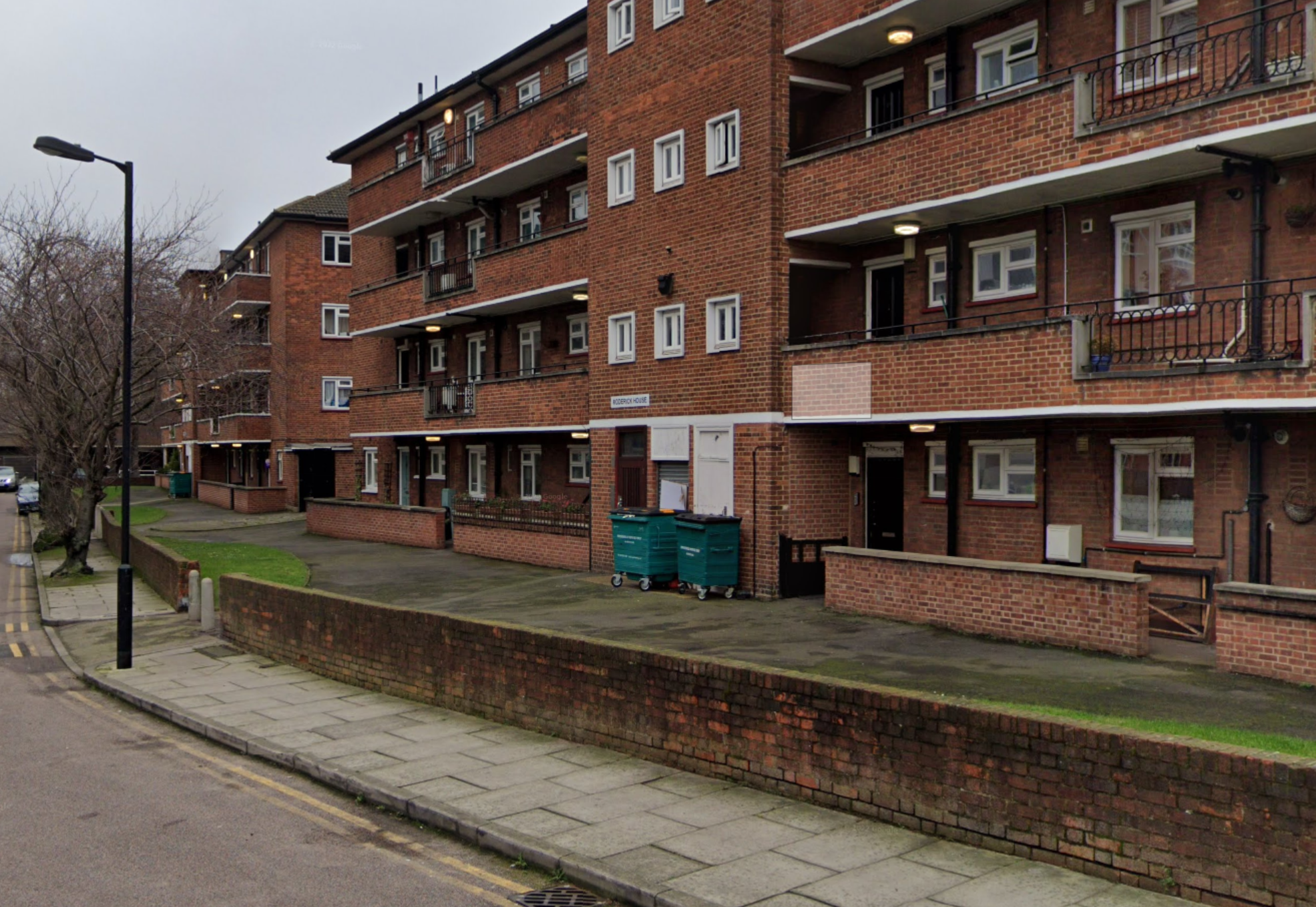 Now, the site was quite small, containing only the two blocks, some gardens to the rear for the residents of ground floor flats and an area of grass bordered by trees to the front and sides of the blocks, through which residents could enter.

Obviously, this sliver of grass was not nearly enough space to build a whole new block. But the association owns the land, so it can do what it wants. Historically, the solution in this case is to evict all the residents, transfer them to another social flat, knock down the buildings and build a new block to modern design standards at a larger scale. Admittedly an expensive approach, but legally and practically well-tested; and at the end the housing association ends up with lots of new, high-quality, flats. And what other options are there? London needs housing, after all.

The trouble with this plan is the residents, most of which have been living in their flat happily for many years. Imagine you’re living in one of these blocks and the association come along and decides to redevelop, and you’re going to get kicked out and have to move god knows where. The association might promise something nice, but when it comes down to it, it’s not going to, is it! Certainly not as central, anyway. What about your garden, and your old neighbours? It’s a lot of disruption, moving, and what does it help you anyway. You’ve got yours and what does it matter if there’s not enough housing to go around. Those newcomers can go and live somewhere else with more houses for all you care.

Now you have these residents legitimately kicking off, and of course the leftist types are on the case as well - angry about the idea of demolishing all this social housing (what if the replacement is shock mixed tenancy!). Other people living nearby can join in the fun too, it’s not exactly hard to emphasise with somebody getting kicked out of their own home through no fault of their own. Especially if they’re vulnerable, as social residents tend to be. And anyway, who wants a big noisy, dusty, and disruptive construction site next to their house in the first place, so this is good cover for one’s inner NIMBYism!

So it turns out, that while the theory behind demolish-and-rebuild is sound, the practice is most certainly not. Residents can tie up the project at the planning stage for years4, then once everything is approved and evictions start, it’s rather surprisingly hard to actually force somebody out if they don’t want to leave. Take Marian Court in Hackney, where one woman has simply refused to move out and stopped the demolition of a whole block since 2017.5 Now 2022, the rest of the block is sat empty, requiring full time security staff, and has not yet been demolished!

But assume it all went smoothly, the council got the planning permission, moved everyone out, demolished, and now has an empty plot of land. What’s to say something actually gets built there? Quite often nothing happens for years, waiting for budget or political approval, until eventually the scheme is rethought and a different approach has to start from the planning stage again. What benefit is there to that? Houses demolished, all the disruption, the cost, everything - for nought!

This has all bubbled up over the past few years as councils struggle to find an approach towards solving the dual problems of lacking social housing availability and poor condition of the stock that is available. Quite often their solutions involve demolitions, but the demolitions are failing to deliver the expected results. The Estate Watch website has some good information on the scale of the problem and the growing anti-demolition movement.

LSHA had another possible problem with demolishing Antony and Roderick: since they are a small housing association with only about 300 housing units under management in total, evicting and rehousing 32 households worth of people all at once might not have been possible at all.

In any case, that’s all just context. LSHA realised there was another option, one that didn’t involve demolition at all! It is quite obvious once you see it, and has a certain ideological appeal (though perhaps not a practical appeal, as will become apparent). 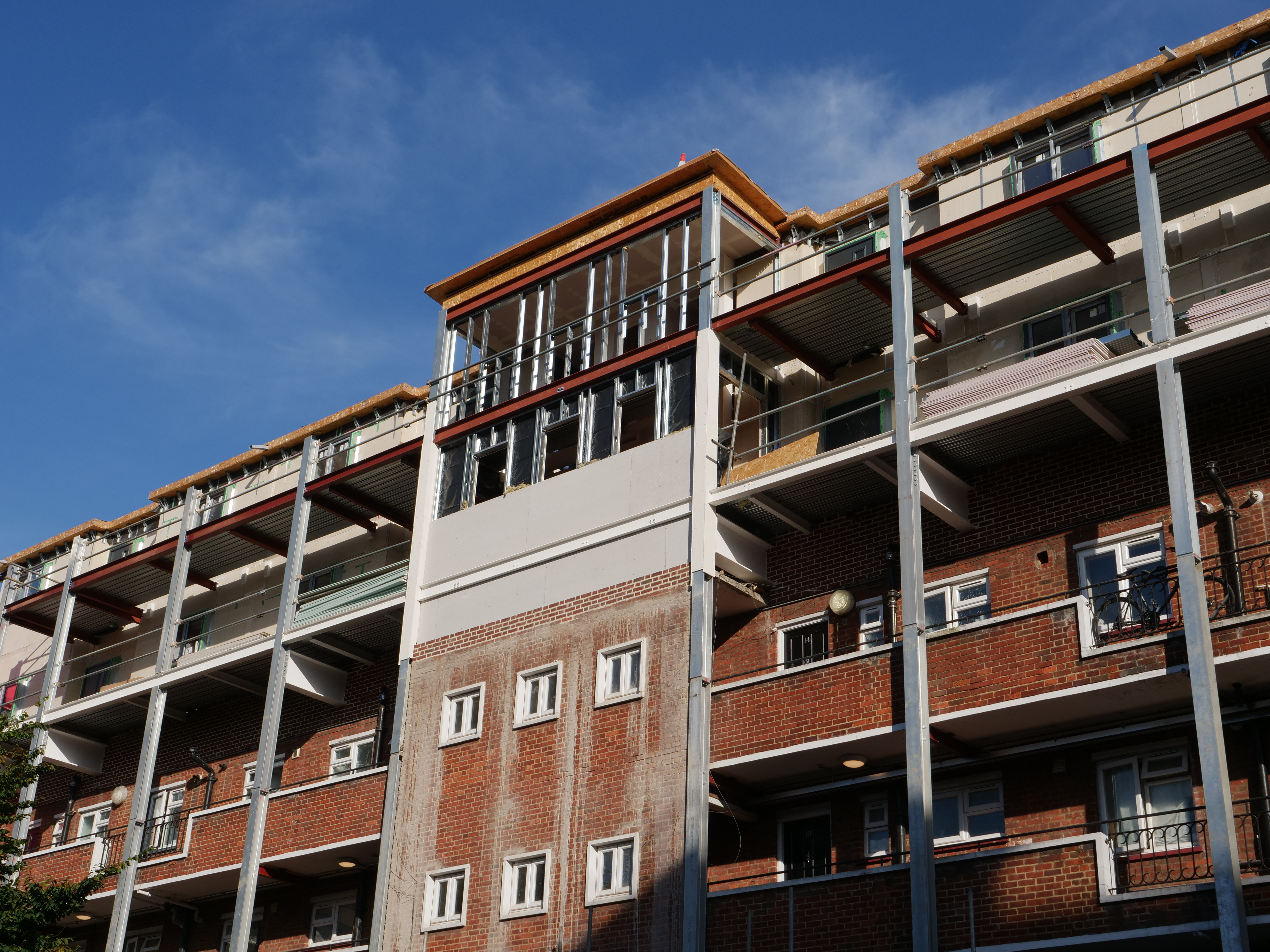 What if you build the new block after all, but just leave the demolition step off the schedule. Leave Antony and Roderick alone, leave the residents alone, and built the new block of flats above the existing ones? There’s enough space between the two blocks for a new lift lobby, that together with another two stories (plus another flat on the width at each end) is enough to double the number of flats on the site.

Modern engineering means you can build a steel frame over the existing building to hold the weight of the new one6, then just prefabricate the new flats, slot them in and the job’s a good ‘un. Almost no disruption to the existing residents, and you’ll have new houses in no time!

That’s the idea, anyway. Not cheap, even compared to demolition, what with all the structural work, making good, etc. But it’s not a complicated project in the grand scheme of things, and it should be a less risky, and a lot more palatable of an option to residents than demolition.

And that happened, or rather it is what is happening now. LHSA appointed contractors Apex Airspace and Adston Construction in late 2020 to carry out the development of the new block over the top of the old ones.

While this approach seems sensible at first glance, it ignores the fact that installing the new block of flats above the existing, and the steel frame to support it, requires that the existing residents live INSIDE a building site for the duration of the works. And further, while modular prefabricated elements have been used in the construction, the project is currently in it’s second year and nowhere near final completion. Buildings are not ‘plug and play’, especially when one is not starting from a blank slate - one is not starting from a blank slate working on the top of a 70 year old existing building with residents still inside!

Is building over somebody’s house over-development?

Residents have been living inside scaffolding, their lives invaded by noise and dust from the construction, and their privacy impaired by workers outside their windows. Some residents have had their flats flooded by construction mistakes, or had holes drilled in their walls.

The grass at the front and their gardens at the back are now a permanent staging area, surrounded by ugly Heras fences, covered in diggers and construction material. All except one of the mature trees have been chopped down (it’s not possible to replace a mature tree) which will be a permanent loss of amenity. 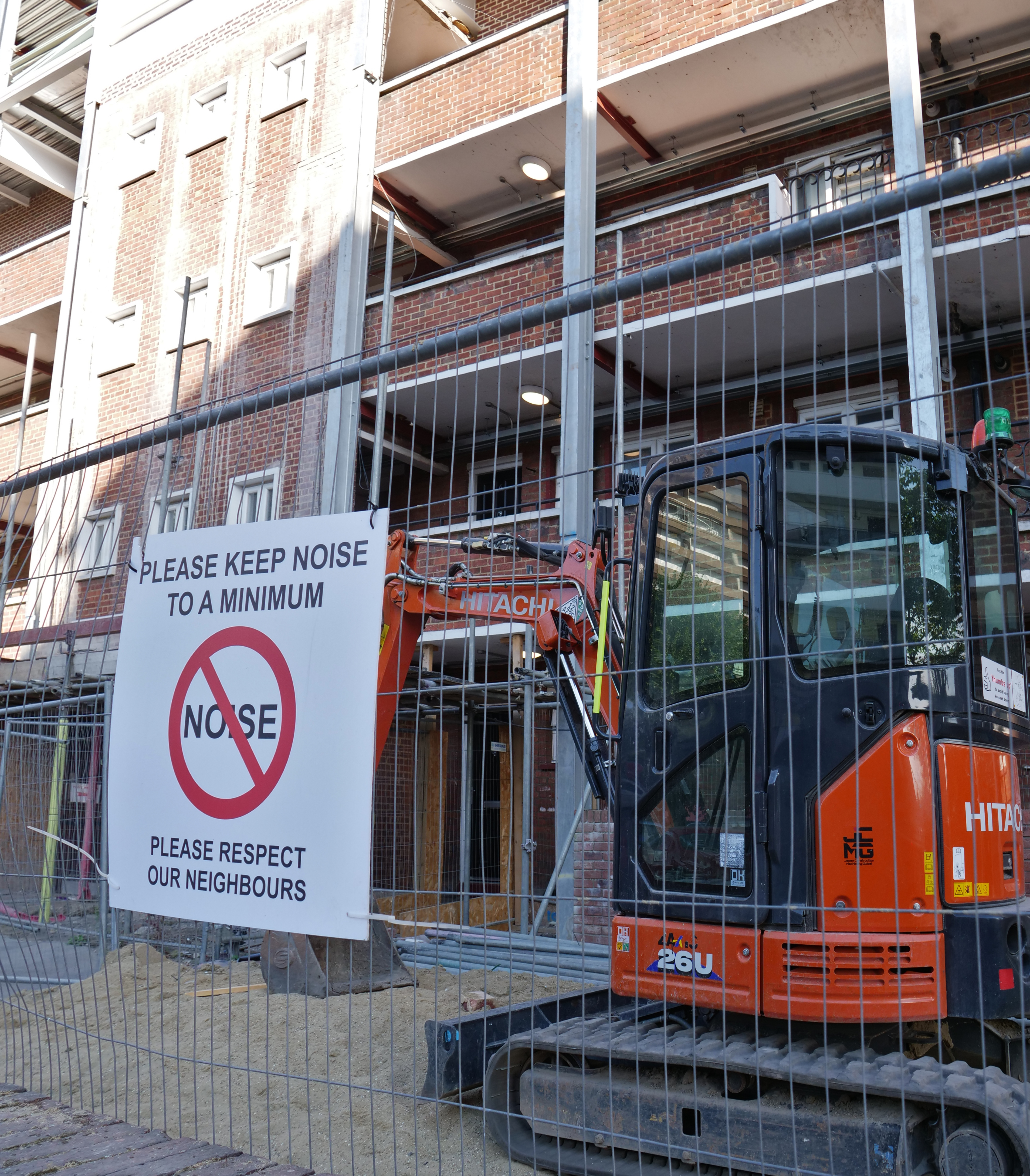 The residents are rightly furious with the housing association, for choosing this approach, for exposing them to such disruption for years on a project with seemingly no end after it gets delayed again and again. And for doing all of this during a pandemic when they were locked down at home so wasn’t even an option to get a break from the work somewhere else.

But (and this is a big one), the work is getting done. In another year’s time, unless all goes horribly wrong, there will be 31 new affordable houses on the site, ready for new residents to move in. The existing residents will still be in place, able to continue largely as they were before. The project isn’t stuck in demolition purgatory or the legal quicksand, it’s actually happening.

That’s the trouble here. If you just ignore the bit in the middle where things actually get done, the project is perfect. New housing built, old housing retained. I’m sure that other social housing providers will be looking at this project as a case study and trying to replicate it in their own portfolios.

There are no good solutions to the problem of building new social housing. Perhaps the disruption is worth it, especially if demolition and rebuild is impossible. But somebody has to pay the cost, and that’s the residents of Antony and Roderick. And that will be the case with any future projects - it’s impossible to build a new building around an old one without a lot of pain to the residents, and pretending otherwise is stupid.

To leave a comment, please send it via email here. Comments are licensed CC-BY as with the rest of the site. Your sender name and email address will be published along with the comment, unless you tell me not to.

Discounted tickets to see Grease at the Dominion Theatre

One of the world’s most popular musicals is back,  even grittier and more glamorous than before.Read more › This article was published on ianVisits SUPPORT THIS WEBSITE This website has been running now for just over a decade, and while advertising revenue c…

Binti is an absolute treat. I've not read much Afro-Futurism, but what I have has been truly excellent and entertaining. What is it like to try to honour your ancestors while feeling the call for adventure? It's a topic which has been explored ad …

How I wish I could organize my thoughts

I keep a pen & notebook on my desk, which I make liberal use of to jot down my thoughts. It works pretty well: ad-hoc todo lists, notes on problems I’m working on, tables, flowcharts, etc. It has some limitations, though. Sharing anything out of my noteb…

All posts on bearblog are licensed as CC-BY rss